An awesome day, and the surprise of getting released early in the afternoon, I take advantage of the fact the wife wasn't expecting me until 5:00pm anyways, and the kids were occupied, to take a free pass and take the LONG way home.... like over three times longer.  I Actually hit the drive way about 15 minutes earlier than I normally would have had I left work normally, so it worked out perfectly!
An awesome day, so I revisited the original Dark Side Ride "Prospectors" route, which meanders over into Missouri via the Tomahawk trail, south on Mission Road to 133rd, over to old 150 highway in Martin City - lured by barbecue scents blown on the stiff SE winds.  139th, east to Prospect, and south to 195th, over to State Line, 199th, and finally taking a rest at Metcalf and the Stillwell Grocery and BBQ joint.
Hotter than I expected, and it really hasn't been that way this year yet - at least, not from the saddle for an extended period.  Standard commuting set-up only has me with one water bottle, too, and I was slacking on hydration.  Doy.  How many different ways must I learn this one?  Hahahaha!  At least I didn't bonk or pass out.  Stillwell came just in time, and I recovered nicely.
Right about the time I was leaving the Grocery, a couple of - well, people I just got finished ranting about a little down this page - came up the road, and proceeded to roll right thru the four-way stop at Metcalf.  Geeez... what to do?  Cervelo.... you know, I take back my desire for one of these, possibly.  There seems to be a stigma growing.  Ugh.  Actually, I quote Lance and retract my last statement:  It's not about the bike.
With their Zipp wheels and sleeveless jerseys, man they looked fast -- and to be fair, they were fast.  With fenders, flaps, full panniers from work - well, let's just give this a try, eh?  Hammer on!  Reaching 30 mph felt flippin awesome with the slight downhill and SE wind certainly helping - and while I started to slowly, ever so slowly, reel back a little distance as they worked together and drafted off one another, there just wasn't enough road to catch up before my scheduled turn at Antioch.  Time to do something that they won't... gravel!  191st Street, some hills, and then the pavement runs out -- to Renner, move gravel, and finally back in the Olathe.  Ahhh.... 45+ miles for the day, a little worse for the wear with the dehydration bout, and a touch of sunburn - not too bad... Ahhhh.... a good way to start a three-day weekend!
I hope you all enjoy yours! 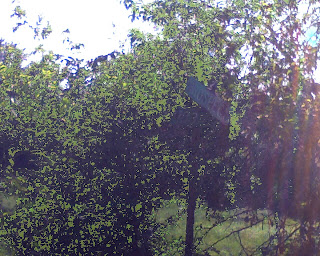