After a RIDICULOUS corporate debacle that unfolded today, on my DAY OFF - that I happened to get pulled into with a surprise phone-call; washed in gentle waters with the promise of adventure and prosperity, only to be later drained and sucked thru a sharp-toothed band saw, spit out and reassembled in some form of my former self....all within four hours!  Kinda like dangling the proverbial carrot....  man.... I'm so hacked off I lost my analogy.  (No, I didn't get fired - for those close to the home camp.  No need to panic -- it is refreshing that even in these dark financial times, however, that managerial stupidity is still alive and well.)  Anyways -- what better way to deal with corporate stress than a nice bike ride on one of the warmest February days in recent memory?
I can't think of a better engine for interval training than being the victim of ineptitude.
Let's ride...
So, I get the Trek out for a nice spin in the...  holy.... it's WINDY!!!!
WINDY!   Like one can expect anything less on a day like this, when winter still has a good hold for at least another six weeks.  If it's warm, it's windy.  It's Kansas, ya'll!
Saddle up, and get aero!
I headed south, into the gale, heading down Mur-Len to 175th, and then on to Lackman.  It was time to test my legs on Lackman's "wall" just south of 183rd Street.
CRACK....  another plastic bottom bracket cup bites the dust....  nice.  Well, it's only outer ring cracks, not a thru-and-thru crack.  Still, it's time to bite the bullet and order the aluminum aftermarket model that replaces.... hey, what's that I smell?  Corporate ineptitude, on the part of whoever at Shimano thought it'd be a good idea to make these bottom bracket cups outta plastic. Grrrrrf.... oh well, ride on:  things are still tight, good to go.
On to 199th, to Webster, to the Spring Hill Casey's, thru old Spring Hill, the industrial area, over the RR tracks, and onto Woodland - finally headed northbound with a REALLY strong tailwind!
Then, it's time for a little gravel-road fun!  I've recently started injecting more fun into my rides, and a lot of that is removing the word "no" from roads that are "road-bike appropriate".  After all, one of my favorite prefessional races to watch is Paris-Roubaix... mainly because they ain't stickin' to the rules.  Road bikes, on some of the nastiest stretches of cobbles and excuses-for-roads in France.  Pure, butter-dipped, awesomeness.  Check out the 2001 edition - one of my faves.
Anyways... back to my ride... a good ride, a good stress burner, and a good tour of the nearby countryside.  I came home refreshed, recharged, and wishing for slightly larger tires.
Oh, and a new, METAL, bottom bracket cup.
Enjoy the pics! 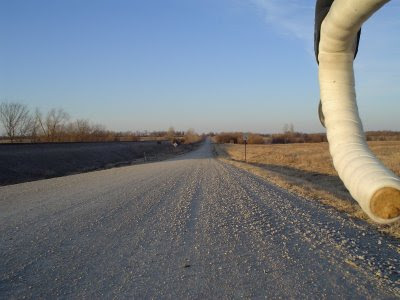 Woodland Road, just north of 183rd Street.  One of my favorite section of gravel road to ride, in either direction, with the railroad tracks paralleling the western side on the ridge.  Kansas has looked like this far longer than it's looked like, say, 135th and Metcalf. 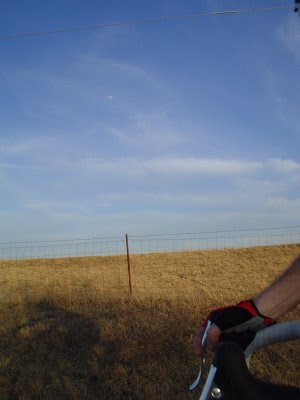 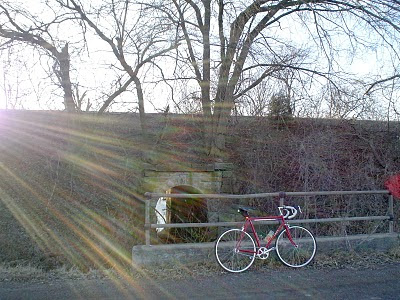 Another example of Kansas early-20th century architecture hidden under the railroad tracks for this small creek to pass through.  All stone, hammer-and-chisel to shape, classic arch-way, complete with threaded-pipe guard-rails atop the culvert.  Hard to see much detail with the sunrays peeking into the shot - but a cool little hidden treasure along a quiet country road. 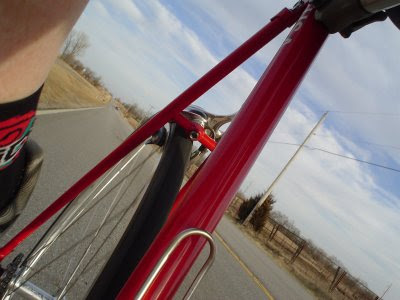 Wicked cross-winds on 199th street -  here's a little off-angle between-the-legs shot.
Usually, only my wife gets that treatment.
Gross.
I'll be here all week. 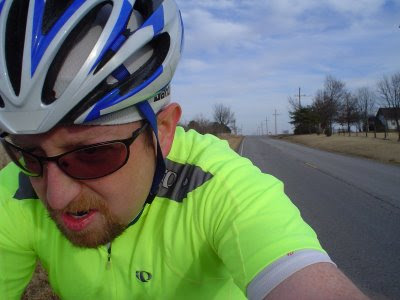 Battling the relentless 25 MPH headwind on Lackman Road, southbound.
Good for burning off those unwanted pounds.
By the way, I've lost 7 lbs. since my epiphany last week.  Tracking your food intake WORKS, and reinforces how silly I've been.  It's pointless to complain if you aren't doing the work - now that I'm doing the work, the results are coming along.  Funny thing, that. 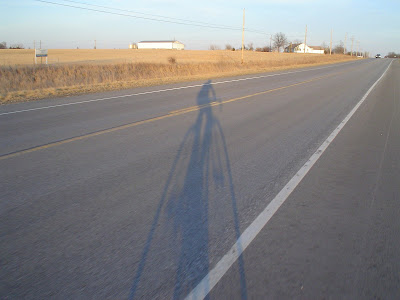 Shadows grow long on 175th Street, headed home on the last leg of the loop.
I'm HUGE!
The wacky February weather continues into next week -- although not quite to the same 67º+ extent... upper 50's with thunderstorms promised for Monday, which will add a little spice to the daily commute!  Winter may yet bite back, but I'm gonna enjoy this while it lasts....
...and while I'm at it, I'm probably going to get in a 200K for this month.  Yep.  I re-read some of my posts, and it's true:  I'm a randonneur.  Will it morph into another R-12 attempt?  We'll see.... but there's no reason why I should say "no, absolutely not." if I'm not burned out, and I truly enjoy those long rides.  Especially if the weather holds.  Banking on the fact that February in Kansas is usually miserable, that's why I'd pretty much decided to take a break... but this weather has really changed my outlook, and if I can get one in... heck, why not?
For now, today was a GREAT ride, and a good preview of how the forthcoming "Hard Cider" ride will probably go.  Translation:  FUN!  As for the corporate world -- it is what it is... so be it.
I have the bike, and they can't take that away from me.
Stay tuned...
Posted by kG on 2/06/2009

This is the first view of the Trek since she went "nekkid"; looks good! I was out for a spin around Gardner lake yesterday...tough going there but buddah smooth all the way home. I actually tested out the 52x11 on diablo rojo!