Yup, that's what it is... COLD.
Continuing my commuting streak into the weekend, I saddled up for job #2 today, leaving the driveway with about 1/2" of snow on the ground and a temperature of 6.7ºF on the thermometer. The temperature in the garage was 51ºF, and I think that might have attributed to this: 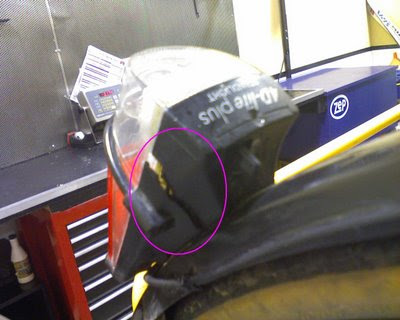 The focus is clearly in the wrong place, but that's camera phones for ya...
I added a circle around what I was trying to shoot; the big crack in my fender-mounted taillight. This is the first time I've ever had a physical failure with a Busch+Muller product - they're tough products. The combination of probably 4 years of use on various bikes, constant vibration, temperature extremes, and tension from the stainless steel guard-bar on this model, which seemed to act like a spring in this case - pulling the plastic apart - it just failed. The plastic at the crack doesn't have the look of something that took a hit. It has the look of something that was stretched. It just popped. It's been downhill ever since October's 200K, where it vibrated apart on me: the post into-which the outer lens fixing screw attaches cracked on that ride, so I used silicone-based sealant to re-attach the lens. It seems the same plastic dry-out was waiting in the wings to wreak this havoc today. About two miles from the house, after getting fully chilled down in the single-digit air, POP.
Electrically, it still works fine. No issues there... but it's already been doped up with silicone once already, and it's starting to show another crack below the first one. Ugh... Oh well.. got my money's worth. Got a new one coming in a couple days.

Aside from that minor equipment drama, the ride itself went well. The Camelbak is fitting the bill nicely, and my routine is simplified greatly as a result. The newer drive train on the Kogswell makes the whole bike feel fresh and lively -- but since it was so flippin' cold I didn't get a chance to really put anything to the test. Survival was the order of the day... the north wind this morning was almost painful at first. The ride home in the PM, a little better... but not by much. It still beats time on the trainer, honestly, and it felt good to get a little of a challenge in the books, temperature-wise.

Tomorrow, I'll probably stick to indoor workouts -- and more snow is forecast in the next 72 hours, so the Kogs might be shelved for a few days while the Krudder is called into action, saddle and all. Ugh... bus-passes are worth their weight in gold!
Posted by kG on 1/24/2009

Speaking of cold, Campmor has some wool gloves on sale for $7.99 a pair. Might be good to pick up a couple pair just to have in waiting.

just curious... how much does a bus pass weigh??

what is the current price of gold?