Hanging with the boy.

It's been a good week.

Since lifting some of the personal burdens, and refocusing a bit, I've had a decent week. Stressful, yeah, but in productive ways, if that makes sense.

The boy had his first Boy Scout campout Friday night into Saturday morning, and I gotta give props to him here. I'm proud, can ya tell? Friday night, it was clear, cool, a little breeze - perfect weather for sleeping outside, under the stars. Stars? Well, maybe not -- the forecast called for a little rain, but instead we got more rain in 12 hours than the area has seen in months, combined. It freakin RAINED.
The boy slept thru most of it, not complaining, not tossing or turning, not even really conscious, surprisingly. perfectly at ease with sleeping and not paying much attention to the deluge falling outside the thin walls of the tent, about 6 inches from his head, he just laid there and dreamed. I knew this because *I* kept waking up -- but, mainly because my alter-ego meteorologist kept wanting to check the conditions. Then, at about 2AM -- KABAMM!!! The heavy rains turned into a collection of chained thunderstorms. The campsite being on an abandoned golf course, you can start to see my nervousness. Thankfully, the generator-powered tower of lights about 20 yards from our tent acted as a nice lightning rod. Yeesh. At least three direct hits - lightning timed perfectly with the thunder. You could feel the heat wave from the bolts -- scary. The boy slept thru it. Meanwhile, the campsite was clearing out, in the rain and thunder no-less. people were leaving, tents were leaking, kids were crying. Keep in mind, this was my kid's FIRST campout EVER, first time sleeping outside, and in a severe thunderstorm and flash flood warning scenario. I have a feeling we'll be doing more of these! He simply wasn't freaked out at ALL. Again, I'm proud as hell. Amazing. Morning came, and the rain STILL came down HARD. We woke up, sat up, and sulked a little bit about the camp breakfast being cancelled - so we had some granola bars that I'd packed, and that cheered us up. Outside, the exodus comtinued, and the campsite at 7:00am was about half of what it was when they called lights-out the evening before. The rain continued, and continued - no sign of letting up. Finally, I decided to "cheat" and turned on the cell-phone and punched up the web and the local radar picture. Egads... we were gonna be in this tent a WHILE. Might as well go, or we were going to be there until 1:00pm. Tummies were growley -- time for grub!
Unfortunately, a creature of the forecast, I had expected a little overnight sprinkle that would let up by 5AM, and we'd be dry for breakfast and the rest of hte activities. To that effect, I hadn't packed even a trashbag - much less a poncho or rain jacket. Ugh. Not really an issue for me - though I would have liked it - more an issue for the boy. So, I took the only plastic I had: the Wal-Mart grocery-sized plastic bag that his clothes had been jammed into, empited it, cut a couple of holes in it for arms and his head, and he at least had a half-poncho. It would work for the half-mile walk to the car. We left the tent, and the field was simply a swamp. We trudged through it, in the downpour, and finally reached our car at the bottom of the terraced, grass, off-road parking lot. THIS would be interesting. I started the car, and the heater, and began manuevering through the pile-up of stuck cars -- the upper layer of grass had been tire-spun away, and the only thing left was a soupy, jello-y mess of mud. No traction to be found - or at least very very little. I got very lucky, and found myself spinning my tires at 6000 RpM (oh yeah, for some reason my shift+p key brings up Windows Media player -- I'm starting to HATE THAT.) Anyways - an HOUR later, I was clear of the muddy lot, and back on pavement! The boy was smiling from ear-to-ear... a big fan of Monster Trucks and getting messy in general, the mud-fest was a delight, and his attitude about the struggle was wearing off on me, and I was laughing and hooting about finally getting free of the mud pit. The tent, it was left behind for a personal mission in the rain later that day, when I would return for the gear -- in the rain, which I thought would let up, and didn't. Wet to the bone, again! What a day!
That campout was GREAT!!!!


Later that day, we drove out to Baldwin City with his cousin and grammy to the Midland Railway, an historical society re-claimed private railroad that makes 24-mile round-trip excursions out of the original Baldwin City railroad depot that used to be on the old Santa Fe line that ran east-west across the country, long before the highway system was built --- the rail-line itself dates to 1867. The history, scenery, incredible. The boy and I have rediscovered railroading together over the last couple of years, getting involved in modeling again with the wife's dad in his basement, train-spotting at some of the locations *I* used to train-spot long before I had even met the wife, and reading lots of magazines on railroading, reading big hardback locomotive history picture books, and dreaming of trains while whistles sound off in the distance at night. It's a childhood passion rediscovered for me, and started for him. Anyways, this trip was a LONG time coming, as he'd never been very close to a REAL locomotive, much less getting a chance to ride inside a REAL train. This was no mall choo-choo for the kiddies, this was the REAL deal. Restored engines from actual stock, and not reproductions, this was rolling history, and the result of 20 years of hard, not-for-profit labor by some really passionate people with skilled hands. We're talking about maintaining 12-miles of out-n-back right-of-way with HAND TOOLS, people. These old railmen are the real deal, doing it because they love it. I want to, someday. We rode along inside an ex-Canadian Pacific Pullman-style passenger car, #801, built in 1936. 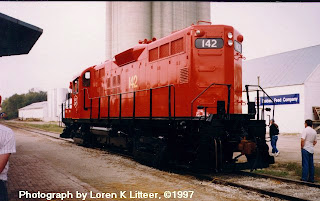 Motive power was supplied by a 1951 ALCO ES-3m diesel from the Missouri-Kansas and Texas Railway (the Katy line, from which the Katy trail gets its name), and the consist 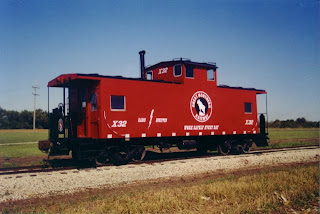 was rounded out with the #32 caboose from the Great Northern Railway, built 1960. The original wood sillplates, the original cushioned seats inside the passenger car, it was amazing -- sadly, I couldn't find it listed on the roster on the Midland website, but I think it was recently aquired and hasn't been catalogued yet. Still, it was pretty flippin cool. The boy LOVED it, and so did I.

Oh, and I rode to work Thursday, the first time on the bike since Tejas. Felt good - faster - fresher. But, ya know, I'm not too worried about that. I had a great week OFF the bike, and I think eventually that will help me have more fun ON the bike, too. Like riding the Katy trail with the boy. Hmmmm...
Posted by kG on 10/15/2007