From the Archives: Ride the Rockies 2002 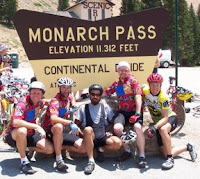 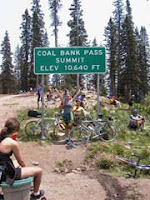 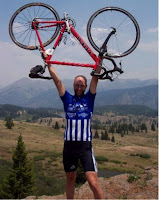 DAY FOUR --- A cool start to the day, and a 2,000 foot climb to the top of Red Mountain Pass right off the bat! Another Colorado morning was on tap -- we had camped at about 9,300 feet overnight in Silverton and the morning was VERY Cold. Actual temp was around 31º, and Lincoln's jeans short that he had hung outside his tent to dry were frozen stiff with frost. Very hard to get out of the sleeping bag that morning! But, as things go up there, as soon as the sun came up, it was instantly 50º. I could get used to this! Then it was 65, then 80 -- yup - 80º by the time we departed. NUTS. After breakfast was over, we had repacked the leg and arm warmers we had been wearing and rode out in our normal summertime garb. The highway patrol had closed the narrow roads of Red Mountain Pass JUST FOR US, to avoid problems on the climb -- and they weren't kidding -- these roads were NARROW, no shoulders. There was no guard rail to be found, and the pavement was pretty rough. After 11 miles of climbing we were over the top, ready for the descent, which was a lot of fun as always. I negotiated corners like a champion, and got very comfortable hanging it out on the turns and hammering down the faster straight-aways as the massive pack of riders weaved down the back side of the mountain -- the scenery was INTENSE - they don't call it the Red Mountain for nothing -- but you have to pay close attention to changes in the road. This was another one of those days where my lack of climbing ability was noticeable -- the group was WAY up the road from me, but I was not too concerned. As a little reward to myself, I had plans to stop at the hot springs at Orvis, outside of Ridgway, CO. - Only 1.8th mile off the route on highway 550, which on all day long anyways -- a nice diversion. I gladly paid the ten bucks, and stripped down to enjoy a nice, open-air, clothing optional (scary, I know) soak in the hot springs. Everyone was just hanging out (literally) and soaking up some rays in the afternoon sun. I managed to get away without a sunburn - amazingly - after about an hour of soaking in the warm, mineral-rich waters. It was interesting with all the other people around, but it was really no big deal -- just nice and natural. It was definitely worth the trip, and I felt weeks of tension just melt... awesome. Hundreds of miles melted out of my legs, and I was refreshed again.
Dressed and back out on the road, with little or no hope of catching the group of Spammers up ahead -- MILES up ahead - I elected to relax a bit and enjoy spinning away the miles. I was fully relaxed, and just enjoyed the rest o f the afternoon. However, the springs had effectively rinsed away all of the protection my chamois Butt'r had provided from the onset of the ride...it was not a big deal NOW, but it would be later on. Aid station three -- no Spam. Aid station four - no spam. Oh well -- fifteen miles to Montrose, CO., flat and breezy. Flat? Flat? >pling!< fffft, ffft, fffft, ffft, ffftt, ... UGH!!! I managed to pick up a shipping staple on the road, and it had worked its way thru the tire and made shorter work of the tube underneath. I removed the wheel, patched the holes, and re-aired the tire. Ready to go. However, the magnet for the computer was now out of alignment and banging against the sensor on the rear stay. Stop, fix, and ride ... only 2 miles from the finish for the day ... stoplight...light turns green...stand on the pedals to accelerate -- WHuuhsshh?? Rear wheel rubbing the Frame??? The skewer had been clogged with dirt and dust, and was not fully engaging the dropouts in the back -- each time I'd try to get on the pedals hard, the rear wheel would come forward and hit the frame on one side. ARGH!!!! A few more fix attempts later, I was rolling - carefully - and then I was in town. Met the group - time to relax again...Saw the Black Canyon of the Gunnison River on a bus tour -- AWESOME sights! Tour bus driver dropped us off at a killer Mexican place and we dined on burritos and beer and margaritas -- afterwards we hit the campsite, snacked on dried fruit, told stories and jokes --- (remember: nickel, dime, quarter, dollar) --- slept really good that night. 60 miles in -- awww, who cares about stats today?

... now all we had to do was drive home. In a Civic with no A/C. Great!
The muffler fell off halfway back, too --- but this is a cycling journal. My car is another story!

We did actually spot some Llamas off the side of the road on the drive back, which sent us into another Monty Python tirade -- we're not sure if they were Mexican or Venezuelan llamas, but it was kinda cool. They weren't dancing, though.