It was cold, windy, hilly, AND it snowed for about an hour just south of Plattsburg, MO.
Why do we ride? We don’t know.
It was an un-usually chilly morning for late March in KC – after all, Spring was supposed to have started, right???
The morning forecast was for 27ºF, but we were all very surprised to see 30º on the bank sign-board across the road as we prepared our gear with cold fingers and heads full of self-doubt. Why do we ride, indeed? But, thankfully, it slowly warmed up to a balmy 40º, making the rest of the day at least an exercise in windbreaker zipper positioning!

3/29/2003 -- The 200K Brevet!
Well, it's been a year since I totally over-estimated myself and rode my first 200K ride ---- Back then, I figured it's only the first day of the MS-150, and 25 more miles. WRONG. It was an absolute suck-fest. But, I finished, and I have the medal to prove it. But I could not have done it without Warbird's help. His tireless pull back south into Liberty from Plattsburg was the only way I made it back. The interesting part about the 2003 200K, is that the tables were turned!
I was in good form --- after a successful winter campaign of heart-rate training, spinning, and dropping about 40 lbs. of fat off of my body, I was READY and WILLING to tackle the 200K and knock it our of the park. No matter how bad last year was, at least it was about 60-70º all day. This year, it never got above 45º - and a stiff northwest wind made the first half of the ride fairly unbearable. The sizeable pack fought its way out east, and then into the wind for the trip NW to the first and only checkpoint of the day. After about 25 miles, the pack began to spread out -- each group was warmed up and beginning to find their own pace. I was managing to stay in the second group, not wanting to blow myself up too early - knowing the hills were coming up north. I maintained a solid pace that put a huge rift between Warbird and I, and most of the rest of the group behind me. At 45 miles out, I was about 30 minutes ahead of Warbird -- shocking! I was doing well, but I should not have been doing THAT well -- Warbird was not having a good ride. Fatigue, lack of training and the wind were taking their toll early. We struggled on, and after a stop (at 45 miles) we tried to stay together for a little bit, but I was feeling good and broke away again -- not 100% intentionally, though. I wanted to help Warbird stay focused, but soon he was nowhere to be found again. After some serious climbing outside of Camden Point, I finally made it to MO-371 and the trip south to Platte City and the checkpoint at the Casey's station. I got checked in, and met Warbird's Dad -- and waited, and waited....and waited........almost 40 minutes later, Warbird was finally making his way around the bend and up to the parking lot. Crazy -- he did not look like himself, and this was only the halfway point. Some pizza and rest, and we were ready to roll out again – Warbird set pace for a while, then me, then a third guy (Gary?) whose name I can't really remember....he's in some of the pictures I have, though - courtesy of Warbirds's Dad! -- we motored for a while, and eventually dropped 'Gary' -- a broken spoke on some low-spoke-count wheels knocked him out of the pace -- I'm really hoping he finished safely... Warbird and I quickly got to Camden Point again, thanks to the new tailwind, and then proceeded north and east to meet up with the monster hills on MO-116 highway. Just as I remembered them, they came one after another -- but I was not having nearly the same problems as last year -- I found myself waiting for Warbird, however, at the midway point of each riser; the once champion of the hills was not on form -- too much flat-land training. I was content to wait -- in a way, I was paying him back for the previous year with each gust of wind I sheltered him from. Despite my smaller waistline, I hope I was offering a little shelter! I just love that now --- me: once the king of descents, was now not so fast on the downhills, and was not much fun to hide behind in a paceline. Heh,heh.... But the payoff is MUCH faster climbing. That's where it counts, after all. We hammered on to Plattsburg, hit another gas station for a rest and refuel -- and were off again. Some dark clouds above, however, were about to reveal their secret cache of moisture.
SNOW. On a brevet? In late March?? Yup. Although it was not terrible, and the temps were above freezing, it began to snow almost five minutes after we left and turned south, and it was coming down about until we hit the Junction at Hwy "C" -- during that time, I stayed firmly on the front of our two-man paceline and hammered as best I could with the help of the tailwind to get us out from under the cloud deck -- Warbird hung on as best he could, huffing and puffing after putting 90 hilly miles in his legs, but holding on - the flat-land training paying off. We slammed south at between 23-27 MPH, passed another rider in the process, and then Warbird popped on Plattsburg Rd -- right at the beginning of the last batch of hills.
The last 20 miles seemed to take an eternity, but Warbird struggled on -- we were both encouraged by the fact that Plattsburg Rd was now freshly PAVED from last year -- Awesome. It made the last stretch more than bearable in comparison -- I was loving every minute of it, taking in the scenery as Warbird carefully negotiated each rise in the road so as not to completely pop and fall over. We made ourway, a few clicks at a time -- each pedal stroke was one closer to the finish. At least the wind was at our backs! Eventually, I managed to get us pulled all the way back to the parking lot, for another successful 200K finish -- and I was ready for more, surprisingly. E-Caps WORK, Hammer Gel WORKS, Sustained Energy WORKS, and Advil WORKS ---- although I need to find the solution to my left shoulder pain before the 300K -- Advil solves the pain, but not the root problem. Something doesn’t fit right…
125 miles of headwinds, hills, chills and SNOW -- what an EPIC ride! 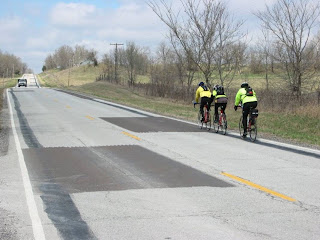 Northbound on MO-371 ; headwinds anyone? 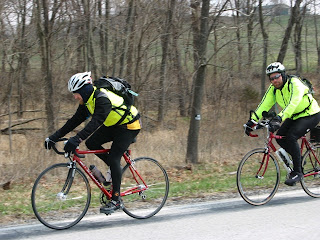 Making my way north, with friends in tow. – feeling good, for the moment… 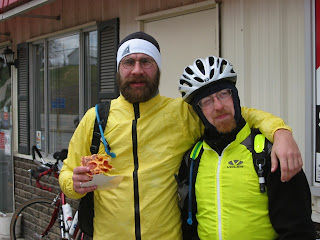 Warbird, refueling --- me, contemplating the altitude to come… 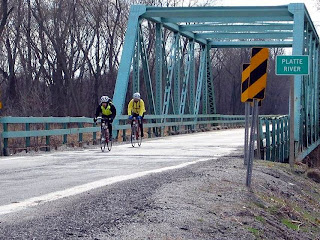 Crossing the Platte River, on our way to the big stuff… 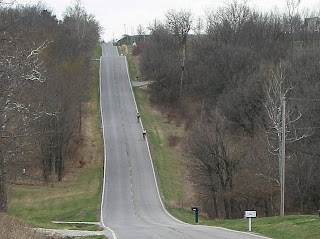 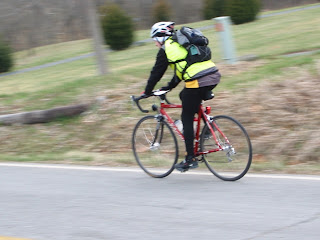 But for every climb, there was a descent…and a brief rest.