Welp, the injury persists -- it's been a while since I've had the energy, nay the will, to blog anything. Those in the know, know, but the wider audience may be new to this latest life challenge.

Last Thursday, my leg, from the previous week's biff on the railroad tracks, was starting to feel good enough that I decided to ride. I woke up and rode in to work on the new steed, logged 22 miles and change by the time I got home, and THEN held a night ride where I logged another 37 miles ---- I never got around to blogging about THAT ride because of what happened the next morning that kinda eclipsed my attention. Still, the night ride was GREAT, a perfect night, clear skies, a nearly-full moon, and a nice, quiet country road where we saw maybe three cars total for 15 miles. It was pretty cool, and a good group - got to shake a few new hands, too, and got a record attendance for a night ride to date, with 6 riders total in attendance. I don't really know what possessed us, however, because - mainly for selfish healing reasons - this ride was supposed to be a REALLY slow, conversational ride. Instead, it seemed like everyone was on some sort of mission, and the pace was hot. Granted, we didn't average anytihng like a Cat.3 gorup might have, but we did finish about an hour and a half sooner than I'd planned, and that was WITH a break at the halfway c-store. The tailwind-fueled run back north on Metcalf reminded me of the Cabin-Fever 15 ride of 2003, except at night. We hammered, and based on Badger's handy GPS Motion-Based playback, we didn't drop below 18 MPH for the entire trip north and that was on the hills -- mostly we were blowing along at 22 to 27 MPH, with a wicked downhill blast at 37. Sweeeeet! Thankgoodness for nice headlights -- oh, speaking of which, and this is no reason to sell a headlight, but it's still a pisser: The Dinotte LED headlight is pretty nice, but desperately needs good optics. Half of the light is up in the trees, since it's essentially a spot-beam like a NiteRider is -- maybe I'm spoiled from the Lumotec's fantastic optics, but hey I don't think I'm asking much. The light would be all that more powerful if it had a little shaping on the lens to get more light on the road where it's needed. Also, however, I don't have any stats from the ride that night because the Dinotte seems to produce a fair amount of spurious emissions, which is fancy talk for interference in the RF spectrum - enough that it blows out the signal to my wireless computer. Again, not a reason to ditch that headlight -- I honestly think the solution is to mount that bad-boy light up on my helmet, and run the generator light down low. Not sure if BOTH are needed for Tejas -- I'll probably bring the Dinotte as a back-up light, but I thought that was a little frustrating. Still, a GREAT ride, and a lot of fun speed play on the dark roads, with great friends!
Here's a couple shots: 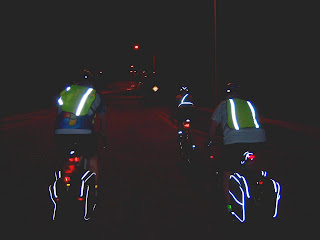 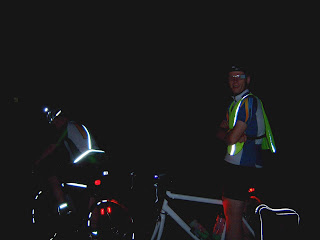 If you've never done a night ride, you need to - seriously.
It's a great way to beat the summer heat, and get a GREAT ride without cyclists' number-one complaint: traffic.
Plus, its a great way to experiment with lights and reflective gear, which is one of MY chief complaints, and why - sadly - a lot of amateur riders are killed needlessly each year: they can't be seen. Reflective gear is cheap - probably the cheapest cycling "clothing" you can buy, and it works!
It's a blast! If you wanna ride NEXT month, email me - we'll keep doing it until it's just stupid cold outside again.

Let's see.... oh yeah --- After the fall on Thursday LAST week (er, week before last, 7/19) -- things WERE starting to get better, marginally, but I have to face it -- this was a MAJOR injury, really. I should have rested it further.

Friday morning, the dice rolled again, and I got into a car wreck. Yeesh -- Let's see, it was LATE getting home from the night ride, and so I lost the fight with the snooze button the next morning, as I was supposed to ride in to work. Instead, I drove, and on Metcalf someone decided to not move when the light turned green, so I started slowing down, had plenty of room -- but the guy behind me wasn't paying attention or something, and slammed on his brakes, was following me too close, slid into me, and pushed me into the car in front of me. Great. SO, I won't even bore you with the car details, but it's ALMOST totalled -- that's a whole other deal. But, it seems to have flared up the leg injury again, as it was excrutiating that night after work. When I say excrutiating, I mean it. I'd like to think that at this point in my life I have a pretty high tolerance for pain - but this HURT. So, Saturday I decided to go have the experts look at it -- it seriously felt like something was broken, but thankfully the x-rays came back just fine. Major contusion, internally and surrounding the right hip, tho. Ugh. While the doc didn't put me on any kind of "don't ride for XX weeks" thing, I'm still staying off of it. It's frustrating -- like the ankle thing last year was, but this time it's BEFORE a major event, not after. I can't just lope around, like I did last year when I was injured -- this time, I REALLY want it to hurry and heal, because Tejas is looming HUGE on the horizon, only 7 weeks away. Can I possibly get enough of a ramp-up in time for the event? I refigured my training spreadsheet, and there just doesn't seem to be enough time to do it at 10%, but I can squeeze it at 20% week-over-week mileage increases. Of course, I can't START that until I heal completely, which I'm hoping will only take a little while longer. Yeesh.
Whether or not I like it, as many times as I've taken one for the team on the MS-150, this year they will have to take one for me, because I'll seriously have to use that weekend for training. Still, it will be fun -- it always is, but I won't be able to poke along this time. If I'm going to be successful at Tejas, I'll really have to work at the MS ride - but that was all part of the plan. With only five months left in the year, I don't want to start putting red "x"s in the BikeJournal goals chart. So far this year has been really successful, if not a little challenging in other areas -- so I'm really motivated to end the year on the same notes I started it off with. This is the first year I've completed an entire brevet series, the first time for a finished 600K -- there's no way I can stop now!

But, care is in order. If it takes another two weeks to heal, so be it -- I will have to make-do. It's better than taking a something temporary and making it a permanent injury. Patience, dude!!!!
All I need to do is one 20 mile lap, and then 8 metric centuries. (Dang, that's depressing.) Ok, maybe five century rides. However I divide it in my head, it's a BIG ride. But, no matter what training and the next 7-weeks bring, pacing and consistency is key to success. I don't have to be the fastest, I don't have to be first -- I only have to finish, and it's only 200K more than the 600K I've already completed this year. It's do-able. 48-hours. That's a 10.4 MPH average: only slightly faster than the minimum pace required to finish a brevet of the same length. Focus on that, and I'll be fine. Pace, pedal, eat. Maybe sleep after the 300 mile marker, just like on the 600K. But, first - HEAL.

Stay tuned! That "wire" they are talking about is coming down! Or maybe I have that backwards.... whatever!