Lately I've been trying to simply things. I pulled the rack off the bike, put the Carradice back on. I pulled that off and ran the messenger bag for a couple days. I dunno what my problem is, picking a mode lately, but it IS fun to experiment. There are some of us that try something one way, it works, and there is no reason to alter anything. There are others of us that are never satisfied, and feel the need to tweak and tweak and tweak some more. That'd be me, depending on the season. Today, for example, I'm back on the Carradice bag on the neo-classic bike. THAT seems right, comfortable, and appropriate for that bike. If I was riding a fixxie, the messenger bag seems better. Hard to explain why portage seems to follow vehicle, but it does.

The other day I totally lost it in traffic, however, laughing out loud -- but nodding in approval at the same time. There was a guy on an old blue ten-speed bike and he had the drop bars rotated in the stem up 180 degrees from their intended position. Yup, like that one scene in that one movie with the catchy 80's music playing while this suburban jock was riding his red ten-speed over to some ladies house to "get the business on", bars high, collar high. Hair, feathered. Hellll yeah..... This guy was dopeness in motion. 115th and Metcalf, too, one of the LAST places I like to be on a bike, yet I still find myself there occasionally, and this guy comes across the crosswalk on this sweet ride, wearing a white button-down and a black tie. Yup, like the Blue Brothers. No sunglasses, tho.

People in traffic were looking at him like this:


It made me wonder, THIS guy is totally just doing things the way he knew how. I don't think he cared how he looked. Made me wonder why *I* do sometimes, and with the baggage shuffling I do. He's comfortable with himself -- maybe I'm not? Maybe so... or maybe it's because all these individual commuting solutions work so well, but each had interesting challenges associated with it, and I can't find a happy medium. But, I can tell you it's not for fashion -- I have no delusions that way anymore, because at the end of the day, I'm still a grown man getting sweaty in tight black bike shorts on a bicycle in the middle of a car-centric culture. I look dumb.

I quote Ice Cube: "Girls in biker shorts are so fly to me."

Girls. Not men. Men in biker shorts are fly to no-one, not even broads. Or chicks, I can't remember. Hell, I just quoted Ice Cube. That alone is gonna get me no play. 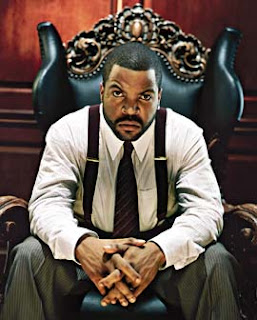 I might get play if I DRESSED like Ice Cube, tho. Damn.
I gotta say, that's a handsome fellow. Course, he looks like he's about to kill someone, but that's okay.

ANYways... down to one bike now, but it's all good. The bike I rode at the memorial ride gave me the last straw big middle finger, so I'm hanging it up and getting on the main bike again. It's actually more than "good" - it's pretty sweet. Now I don't have to fidgett with the tape measure trying to get all my bikes set up identically -- I can swap a few wheels around, and everything stays the same from weekday grind, to weekend fun. Yeah, that'll change as soon as I get the cash for a new fixxie or something, but for now it's great considering what I'm training for. As long as I have a monster tired fixed-gear back in the stable before winter, it's alllllllll tasty.

Today's commute was fantastic - left the house early, and enjoyed quiet streets for once, and the solitude and warm comfort of my headlight beam showing the way as the crickets and bugs still sang out in the warm pre-dawn air. Ahhhh....
Riding the good bike to work makes things better -- smooth shifting, steel ride...
...and Carradice bag. I had this notion that it wouldn't be big enough, so I bought these panniers, which ended up being big enough to take a small mammal to work with me. Combined with heel strike that I couldn't get adjusted out, and those have been retired now. The Carradice is perfect, always has been. Style, function, quality, and it's centered over the rear wheel and up close to the bike's center of gravity. With D-rings on the outside, it's easy to lash extra layers to it with some old toe straps. Reminds me of how I had the old Trek 720 set-up for the winter of - you guessed it, 2003. 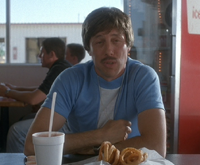 doncha ever wish you could go back.... things'd be different....yeeeah...
How much you wanna bet I can throw this bicycle over those mountains over there?

Welp, that's it for now. I'm gonna go wallow in my continued snot-ridden existance whilst I type away in my cubicle. Snot. Yeah, you thought it was rain... get a towel, because it's laid out like that.

I always enjoy your posts!