In an effort to curb a little of my frustrations this week, with regards to traffic and such --- gee, what a surprise?! --- I played around with my bike route this morning, got lost, and got really cold feet in a steady, cold, NE wind.  WHOOO!  I should learned this on the way home Tuesday afternoon, when a wicked west wind chilled my socked feet to the bone!   Perhaps its a factor of getting older and having my tolerances for things slip a little bit, or maybe everything else is so good, I just have to find something new to complain about.... maybe not:  okay, some things are complaints, other things are real:  when you can't feel your toes anymore because they are SO cold, it's not just a complaint... you need something other than socks and sandals when it's windy and in the 30's! Aw, well -- sometimes it's a good thing to know what it feels like to be cold on the bike.   It makes those warm days, those thick socks, that hot coffee, all the better.  This week has reminded me that sometimes dressing based on the temperature sometimes isn't quite enough, and headwinds make a big difference when it's cold, and my commute is just long enough for these things to become important.  Weird how I seem to learn these things just in time for the warmer breezes of spring to finally blow in, next week!

A couple of random pics:
After some fairly substantial rain-fall Monday and Tuesday night this week, my usual bike trail route is pretty well useless for a while.  The parks departments usually come in with Bobcats and clear mud from the low-water crossings, which is a blessing -- but I don't think they've gotten around to it this week, as I found out.  Crossing under Quivira, I had to put my sloppy-trail hat on PRETTY quick.... quicker than the guy that came here before me!  Staring me in the face as I came off the downhill that dives under the main road and right down to creek-level, I see a pair of dried-over mountain-bike tire tracks.... they head straight... then they separate as the rear wheel slides... there is a ridge of mud pushed up ahead of where he was sliding... and it keeps heading straight until I see a similar mud-ridge where the front tire must have been... then a big open section of exposed bike trail where the person's body must have come down, amid a scattering of handprints in the mud, and footprints everywhere!  This is all dried over, so I'm looking at it like some C.S.I. Bike Trail episode, watching the scene play in my mind like one of those ghost-image overlay scenes - where the agent is standing in the frame, and the events are playing out around him as he talks it out.  This is right about the time where I realized that, while I was staying upright in the still-wet section of 3"-deep mud that was covering the trail, I was slowing down... a lot...  shift, push, shift, push..... slidddddde, WHOOO!!  Morning.  Okay, foot down.  Squish....  My Fenders choked with mud now, brakes, all the usual places.... nice, thick, tire-stopping mud.  Okay, maybe it's too soon to get back on the trail.  I emerge, finger-clean the mud away from as much as I can, and then ride up to street-level to continue my way in.  The fun part:  after you accumulate this much mud, and then hit the streets again... as I'm motoring along, big hunks of mud are catapult above my head, off into the grass, up ahead of me -- fling, flong, pah-choooo!   I love that part... and, then for a few miles, every pavement joint is followed by a spray of smaller hunks of mud that were hanging on for life inside the fenders.... screeeeee.... all over the pavement as I putter along.   he,he,he... Makes me wonder on these trails sometimes if a Surly CrossCheck and bigger fender clearance is a good idea for a future commuter-steed.  That might be fun....some small 700c knobbies, just plow right thru that junk... whooo! 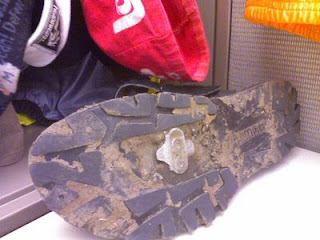 My right foot. This is after knocking most of it off. By the way... THAT'S why SPD cleats rule. Even after all that, I just step on the pedal, click... go. Mud don't matter.

Fake sausage from Morningstar Farms, hot coffee, Cheerios... I feel much better, and I can feel my toes again!


Other random-ness this week....and a few weeks ago that I forgot to post:

A cool, pinkish sunset out in front of job #2, as I prepare to head home: 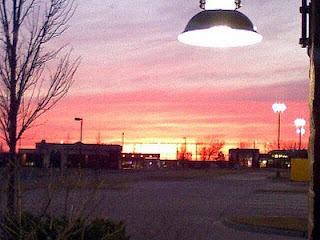 A couple of Surly LHT's in front of one of my favorite (new) hardware stores:
You gotta love a store that calls itself "Nuts & Bolts" -- they were in there for the same reason *I* was... rack hardware. I can spend HOURS, and only $5.00 or $10.00 in a place like this... new stainless fender washers, fancier bottle cage bolts, wacky spacers I'll probably never need, aluminum rod for a random project, solutions for EVERYTHING... those Servalite boxes, it's like they were made for cyclists. At that moment, the ratio of cyclists to regular-joes-looking-for-bolts was pretty even. Rock on. 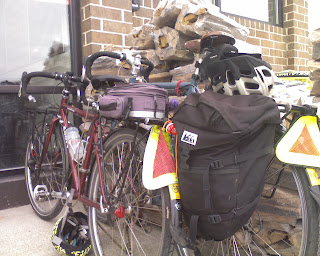 Nice set-ups: Ree-Lite battery-free safety flashers on the axles, SMV reflective triangles, bags, fenders. Set up for solid commuting, or a month out on the road. Sometimes my own policy of "mind-your-own-business" (read: social shyness) prevents me from getting the story. I shoulda asked, really. But, that day, I was in plain-clothes - they had ridden there. Shame on me, yeah, but it's harder to start a conversation when you're the one in cycling gear, and a regular guy comes up and starts asking you a buncha questions -- the best ice-breaker is sometimes the fact that both parties are obviously in cycling-wear. Anyways... sometimes a little mystery is good: I will forever have an image in my head of husband and wife wearing high-viz yellow, hunkered down in the aisle of Nuts & Bolts, comparing the bolt that broke with a bolt from the Servalite tray. that kind of self-sufficiency and inventiveness deserves be rewarded in these pages. It's the whole picture of the touring cyclist.

I think that is Caroline H.'s Surly!

Please let me know where this Nuts and Bolts place is, I would love to go there!!!