Well, it took long enough, but I finally just caved in took digital pictures of the print pictures that were taken of me on the 400K back in May 2003. Crazy! I’d only been promising this since the site first came online! 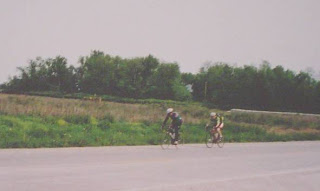 The BAM rider and me – trailing in this shot, with the backpack and sandals – making our way north on
US-71 Business, towards the turn at “F” Highway north of Butler, MO. At this point, we have been riding
154 miles, and about 10½ hours. 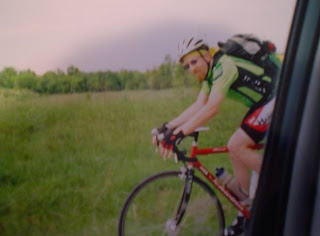 A little while later, me off the front on “J” Highway – still smiling after about 170 miles in – the shot is a
little blurry; it’s a digital picture of a film picture that was taken from behind the glass of a moving car.
Not too bad, actually! But, yes – still smiling despite the horrible pavement. 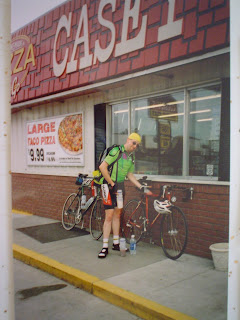 Not an official checkpoint, but a welcome opportunity on this particular 400K route; a Casey’s – the
oasis of the ultra-rider – at La Cygne, KS, about halfway across K-152 between the state line and Hedge Ln.,
our next turn north towards Paola, KS. A quick refuel and rest opportunity is welcome after nearly 200 miles
on the bike. Here, I introduce ‘Agent Orange’ to the camera – I just let the bike do all the work; that’s my
big secret. Later on, I would tap-dance.


It was a very good afternoon on the bike, as we continued north onto Hedge Lane and on towards Paola. We managed to reach the bridge that was under construction before the sun started going down, which was good since neither of us were looking forward to walking across it in the dark. Soon after that, we were rolling back into Paola’s Conoco, within 12 hours of having checked in there the first time! The sun was still up, and it was looking very promising that I would finish before midnight, which was my unofficial goal for the ride. At this point last year, it was dark and I was considering cashing it in – and not soon afterwards, I would. Then again, I didn’t reach Paola again last year until 10:00pm! This was going MUCH better. At this point, I was no longer concerned with holding a heavy pace – I had made the last checkpoint before the finish, and it was time to concentrate on just ‘finishing’. I let my day-long BAM companion head out, with a handshake and a smile, and said hello to my old friend Dale, who had been unable to attend the ride but still wanted to get some mileage in regardless. After a little rest, we decided to try and get a little farther north before the sun went down, preferably past the confusion of Spring Hill and the low-traffic of 199th St. We made good on that goal, hitting the pavement of 199th St, just before the sun finally dipped in the West. Taillights and headlights ON. Unfortunately, Dale’s headlight was not working for some reason – no problem; Dale would simply trail me for the ride back to my car in Grandview. Unfortunately, 199th St. is BLACK after dark. Even though I was putting a solid swatch of light on the road in front of me, Dale could not take advantage of it while in my slipstream – by the time we reached the Texaco station at 199th and US-69 Highway about 12 miles later, his arms were sore from gripping the bar so tightly. Twelve miles of riding into pitch black will do that! He decided to ditch there, and get a ride – but in order to finish officially, I had to continue. I big farewell to Dale, and continued onward into the abyss of nightfall in southern Johnson County. My last leg was one of the hardest of the ride – only a dozen or so miles to go, but there was a lot of climbing coming into the mix.
The hilly and curvy darkness of Mission Rd, to 159th, to Kenneth Rd, which then becomes State Line Rd, and then east back into Grandview on Main St. – and by this time the wind was howling, and there was actually a flash of lightning in the distance from behind me. Thunderstorms had entered the forecast at some point in the day, but they were too far away to affect me now – 5 miles left, then 4, 3, 2, and 1. And the feelings flooding over me as I got my timecard signed for the last time that day are indescribable. I HAD FINISHED, and in the process had broken my personal highest-one-day-mileage barrier with 252 miles and change. Not only did I finish the ride before midnight, I was home and in bed before midnight, too! Awesome. And, as always – I can’t wait until next year!
I was now pumped and ready for the Mississippi Valley 24-Hour race in August…

My official time card from the 400K – for those that have never done a brevet before, this is something you
should get familiar with. Not even the money in your saddle-pack is as important. Lose this card, and your
ride doesn’t count! Each checkpoint is designated, and your card must be signed and timed at each point.
After completion, your card is turned in and sent off to the officials at Audax Club Parisien for the official stamp, and
Then mailed back to you – this shows me completing the 400 kilometers in 18 hours, 4 minutes – stops and rests included.
Not bad! Plus, you get some handsome medals to hang on the wall! 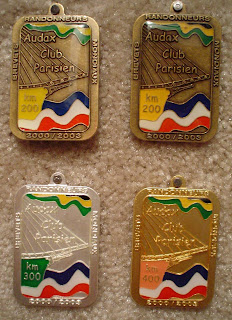