The usual mental load of work and outside work are still keeping me away from the keyboard, so I at least wanted to get a photo-post up for this most recent ride, which marked #24 in a row - for R-12 #3, complete!  I don't know if I touched on it after the last ride, but, having the Carradice saddlebag back in the arsenal is SO nice.  I was able to just ride, and not worry about where to stow things - and best of all, it allowed me to keep the camera handy, for lots of on-the-road pics.  WAY more than usual, which is a good thing.  This helps with ride reports as well, and while this is something of a photo-dump for now, check back:  I'll be adding notes later on, most definitely, because - especially for the last 25 miles or so - there remains much to tell.

For now, the ride in brief:

Prep begins:  Glen in the mobile fortress.... a.k.a., zie RAAMwagen (a secret nickname I've given it, but really haven't uttered until now... muahahahaha!)  No, that's not an announcement.. just a deeply unfounded and financially ridiculous pipedream... for now.

Next to it, the SAG-Delux, now with roof-carrier!  Thanks, again, Badger!


We began our tour promptly at 6:09am, after checking in at Speedy's c-store, and headed out onto quiet St. Joseph streets.  It really didn't seem like a Monday morning... light traffic, but who's complaining?
The early hills taxed my legs a bit - I never seem to get warmed up until maybe mile 20 these days, so early hills are always a bit "fun."


We made Oregon, MO. at about 8:20am, for a non-control refuel and refill.  I like this little town - quiet, friendly, familiar.  Good ole Americana. 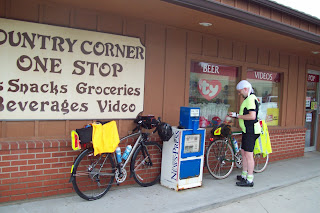 Right at the state line, at about 9:45am, the sun finally comes out in full force, and the clouds disappear!
Sunscreen time!

We make Falls City, NE at 10:30am, approximately.  Skipping the Subway sandwiches this time, we are in and out in 30 minutes or less, swapping layers, refueling, and laughing.  Sonic, just down the road, becons.... but, I resist the call of tater tots...

Meanwhile, it's a great day for a ride!


After the fun of the camera, we checked off the remaining miles to White Cloud, KS., and the Tee with K-7, marking our final run back to the finish.  In November, I managed to recover from the chipseal pounding and up my pace to a degree that would help salvage a decent, though difficult, finish.  THIS day, we had been planning on the same, yet the difference lay in how fresh we'd been compared to the November version.  I felt strong, fresh, ready - and Glen and I both knew we were on-target for a sub-12 hour finish, perhaps.  It had been a near-perfect day, nutritionally, and it reflected in our riding.

Until we hit White Cloud.

This is where the pictures stop, and the tale begins... a reversal of fortune neither of us saw coming.
Arriving at K-7 and Main street at White Cloud just a hair before 4:00pm, with light winds and hot - but bearable - temps, Glen and I said "hello" to the river once again, and turned south.