Just a couple shots from a commute this week - if you can dress warm, there is still some good riding to be had. A lot of those "same ol' trails" look very different after a snow - so ride slow, and enjoy. 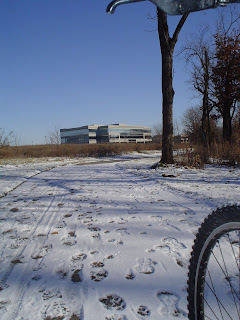 Inbound, on the way to work: I took advantage of a half-day to take some day-lit shots. Although the sun angle still produces a lot of shadowing, it's better than trying to take pics in the dark. This shot is rather unremarkable, unless you click on it and blow it up. The main reason I took it is not for the picture of this building at center, but for the three sets of tire tracks in the snow on the left. All distinctly mine; one set being from from Wednesday morning, another from Wednesday afternoon, and a third from Thursday afternoon. There's no Thursday AM set, because I had taken my bike onto the bus that morning. I took this shot on Friday late AM. No-one else had ventured onto the trails besides me, save for a half-dozen or so joggers, dogs and hikers, their foot & paw prints scattered about. That made me feel pretty good. With the warmth of that day reaching above freezing, however, the remaining patches of snow revealed that a lot of riders had gotten out and ridden that afternoon. Another good indication that studs were a wise choice, the other tire tracks I witnessed were visibly "all over the place" - where mine were straight and, well, boring. Studs? Yeah, there's a difference. While most of the snow had melted, I had to remind myself that the shadowed patches that remained still had ice underneath them, like this section shown above did.

(Upon close inspection, I might stand corrected -- there is a faint, random line that appears to be a bicycle track, but it's light and erratic, hidden in the footprints, which also might be a good comparison of studs vs. normal tires - see if you can spot it, and more importantly how wide they came out of - or into - that next corner.) 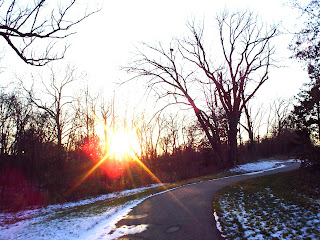 The end of a long work week, and a nice day. It got up to 38ºF on this ride home, and you can see most of the leftover snow from the AM ride in had already melted. I was alone with my thoughts, my camera, the buzz of my tires, and a nice sunset.
Posted by kG on 12/12/2009