Track the Pony Express Permanent's trek across the miles:
CLICK HERE to 'SPOT' Spencer and Danny 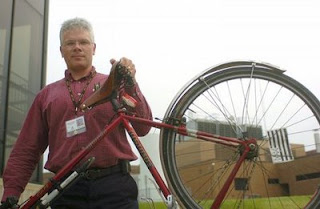 Spencer Klaassen’s wife chides him for taking things to the extreme. He doesn’t argue.
He wouldn’t have much of a chance winning an argument anyway, given that he annually races a bicycle more than 100 miles in snow in Minnesota in February.
Mr. Klaassen, who lives and works in St. Joseph, grew up in Chariton, Iowa, played football at the University of Northern Iowa and at Drake University, where he earned his pharmacy degree. At 43 years old and sporting a head of prematurely gray hair, he’s still built like a solid defensive back. But then he’d have to be to ride a bicycle unassisted from Sacramento, Calif., to St. Joseph in 14 days.
Mr. Klaassen and a friend from Columbia, Mo., Dan Clinkinbeard, are teaming up this Sunday to begin a symbolic ride that Mr. Klaassen originally planned to do a couple years from now. It loosely follows the Pony Express riders’ path over 1,900 miles.
“Mentally, it can beat you down before you even get started,” Mr. Klaassen said of the frame of mind one has to attain to consider a ride of such distance. He laughs in near disbelief now, but claims to have experienced slight hallucinations once on a non-stop 350-mile trek — animals and people were running along side him.
But this is what happens sometimes when you are a randonneur, which in the cycling world means you take ridiculously long, unassisted rides that aren’t races, but are timed. As members of RUSA (Randonneurs USA) the duo take “validated” routes that vary in length, generally ranging from 120 to 375 miles. The Sacramento to St. Joseph route is the longest offered by RUSA.
Bob Fitzpatrick, a cycling friend of Mr. Klaassen, asked him to bump it up a couple years to coincide with the beginning of the first stage of the Tour of Missouri professional bicycle race, which begins Sept. 8 in St. Joseph. Mr. Klaassen is expected to arrive in St. Joseph just before the race begins.
Mr. Fitzpatrick, who rides with Mr. Klaassen two mornings a week, came up with an idea that would link St. Joseph, the Pony Express, Mr. Klaassen and the Tour of Missouri. Mr. Fitzpatrick and fellow pedaling friend Tim Garvey brainstormed the idea of offering a prize for the winner of the first stage of the Tour of Missouri. They were searching for a way to put a St. Joseph stamp on the world-class cycling event and raise awareness of St. Joseph’s history. They’ve teamed with the Pony Express Museum to make it possible.
“We hope that this premium will excite the riders in wanting to really scramble hard to get the cash prize and the mochila,” said Mr. Fitzpatrick, who is also on the local organizing committee for the Tour of Missouri and is a member of the St. Joseph Bicycle Club.
Indoor bicycle races in the 1920s, as Mr. Fitzpatrick explains, were well-attended events where affluent spectators put up money for a “premium” or “preems” that would go to the rider who finished first. Mr. Fitzpatrick and Mr. Garvey borrowed from that history and helped establish the St. Joseph Mochila Premium. The winner of the first stage will receive a replica of the mochila (mail bag) that the Pony Express riders used, plus $1,500 cash. The winning rider will receive the prize on the podium in the Country Club Plaza in Kansas City, where the race finishes.
Mr. Klaassen, whose ride is sponsored by his employer, Heartland Health, and the Mark Reynolds Fund, is scheduled to arrive in St. Joseph just prior to the start of the race. He’s tentatively planned to get a police escort as he makes his way from Elwood, Kan., to the start line behind City Hall, where he’ll hand over the mochila.
Donations are being accepted to offset the costs of the mochila replica and the cash prize. Interested parties can call (816) 279-5059.
For more information about the Tour of Missouri, go to http://www.tourofmissouri.com/.
Jimmy Myers can be reached
at jimmym@npgco.com.
Posted by kG on 8/22/2008