In Appreciation of Permanents

For those in the RUSA circle, we all know about the "accident" and "lawsuit" - and today, because of the difficulty in obtaining insurance, the RUSA permanents program, of which I had been a frequent flyer and had stacked up five R-12 awards through its use, is now gone.  This is obviously a heartbreaking thing, but, with my school schedule - yeah, still - riding and even organizing/officiating them had become a bit of a struggle.  I was certainly not alone.

I had been watching a passionate forum thread about the permanents program, and found my mind wandering about my own riding over the past few years and about the future of RUSA, and ultimately felt compelled to weigh in.  The result was a bit of a thank-you letter to permanents, some closure, and a look at the bright side ... at least my version of it.


Before RUSA, I suppose I was a regular cyclist ... I rode to work, enjoyed the weekend warrior stuff, and trained for the local t-shirt, club, and charity centuries here and there.  I was never really fast enough for racing, yet I always found myself wondering "what's next" after those local club centuries.  "Man, wouldn't it be wild to ride the 2-day, 150-mile charity ride in ONE DAY?  Whooof..."  Big dreams...

I found our region's RBA 20 years ago and the rest is history.  Before the internet, I still don't know what sort of magic aligned to get me on his email list back then, but I'm SO grateful it happened.  A lot of it was through my good friend, the Warbird, and his friend from work, the legendary Grim Rieper.

Those early rides were truly self-supported ... organized by Bob Burns, my favorite old-school hard-liner.  Boy-Scout, military preparedness ethos ... hand-scribbled cue sheets ...dim, halogen generator lights if you were lucky enough ... GPS wasn't even a "thing" yet, and getting lost simply made for a better story.  What happens if it rains?  You'll get wet.  You drink the wrong nutrition?  You'll be pukin' in the ditch ... but, dang-it, you'll have a good ride.  AND WE DID.  Sixty miles between controls?  Suck it up, kid.  Just pedal, everybody's tired.  That's how I was taught, and it was GREAT.  Never realized in the moments, those rides were seldom about the rides ... they were about figuring myself out, learning tenacity, patience, resilience.
My only regret is not finding it sooner.

With that upbringing, it would be easy for me to also be a hard-liner about some of the things being discussed over the last few days (the notion that permanents and anything less than 200km is not truly the mark of a randonneur), but I'd rather be inclusive and try to grow the sport, because I know what it has done for me.

"Not a randonneur."  I've said that about MYSELF.  All the talk back then about rando was getting to Paris, yes.  That was the title goal, justifiably.  If it wasn't Paris, it was racing Ultras.

But, I was never going to be able to afford going to Paris.  With kids, multiple jobs, returning to school ... the longer rides, still to this day, just aren't going to happen.

Amid carbon fiber and custom steel, my early brevets were done on cobbled Frankenbikes .... not to make a statement as I'd professed, just because I couldn't afford anything nicer.
I slowly amassed skill and better parts, and ultimately grabbed a SR series.  The journey has been amazing.
Considering my personal journey, I am immensely proud of my one, single 600km ACP medal.

Permanents were around back then, but riders were not allowed to repeat a route to chase the relatively new R-12 award ... so getting the R-12 in those early years was a genuine feat.  Back then, only the giants in the sport need apply ... early hints of future K-Hound heroes, brevets and the R-12 were simply the byproduct of people training for RAAM ... back when RAAM didn't require 15 corporate sponsorship deals just to pay for gas.

All goals ... all out of my reach.
So, in 2008, when the RUSA perms rules changed to allow repeats, I instead latched onto the R-12 as a personal goal.

What I noticed, however, is that I started finding myself riding solo more often than not.

I found myself sometimes skipping a club ride because I knew I could "keep my streak" with a 200k later that month, on my own terms.

In doing so, I isolated myself and removed one of the key elements of randonneuring.

When I look at the future with a lack of perms in place, I see the opportunity -- if only from a personal standpoint -- to put the "camaraderie" back into my cycling.

The sudden rarity of organized RUSA and ACP events compared to the "whenever I want" permanents should actually serve to enhance the experience, not leave us missing what we've lost.

That's the silver lining I can see.  I'll drive a few hours to a dark parking lot a couple times a year for that opportunity.  I've never come away thinking it hadn't been worth the trip, even if I'd slept in my car.

I will still ride a 100 or 200km every month if I can help it, credit or no credit, just to keep my edge sharp, to refine my gear and approach to controls, in the hopes of someday practicing what I've learned in Paris or around one of the Great Lakes, or in the Rocky Mountains.

In the meantime, the lack of perms can be a bit freeing.

If I want to wander off-route and see where that road goes, spend a little too much time at a pie stand, try some gravel to get off "that dang highway" finally, or finish in my own driveway instead of the sketchy gas station where I used to need to get a final receipt .... all the better, right?

If the only "credit" I can get anymore is with a group of like-minded randonneurs again, once or twice a year ... that could be a VERY GOOD thing for randonneuring.

Scarcity will re-sweeten randonneuring for me ... and with this perspective in mind, losing the perms may be the best thing to happen to my cycling in years.

I am proud of the miles I spent, alone, in the dark, chasing my goal over my R-12 runs .... but if I can share a pull and a sunrise with even one other rider, because we each, now, only have THIS ONE BREVET .... that's a good thing.

I'm not sure we need more rides, necessarily, because - like I had - people will invariably "just catch the next one".  When that happens, we aren't building relationships, sharing miles, or growing the sport.
Granted, it can STILL happen with monthly rides ... and it does in many regions.  Where ridership is already scarce, however, it might dilute things.

I think we should look at this an an opportunity to bring randonneuring back to what I had slipped away from.
P-12 and R-12 are still amazing goals to set, considering that randonneurs of ANY caliber represent the outlying 2% of anyone who ever throws their leg over a bicycle ANYways.  There are some strong riders out there who work all year just to ride ONE CENTURY at the end of summer, and we have folks riding one per month?  That's incredible, and shouldn't be cheapened.  No matter what ANY cyclist is ... being a randonneur pushes us to achieve 120% of ourselves, whatever that 120% might be.

When looking at the RUSA membership uptick that occurred when RUSA began offering the perms and subsequently the R-12, we should remember our collective quest to keep building membership and giving those wondering "what's next" a place in our big tent.

But, I think we can do so without the perms program .... not sure what it look like yet, but, it's whatever happened to connect me with my RBA those years ago.

Load up the Facebook groups, plaster the LBS with flyers, make rando club jerseys and wear them on every ride, host a few coffee shop rides and talk about what that "weird big saddlebag is for" .... and see what happens.

I found some of my best friends that way.

Especially with what has befallen our world in these last few weeks, we could use some good, clean fun out in the fresh air.  Please enjoy responsibly. 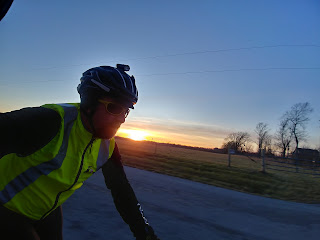