Randonneuring is all about pushing one's limits and exploring far-off places... and a lot of our local randonneurs have made very good on those goals this year - as they do each year.

One such event was the recent Mac-&-Cheese 1,200km, which takes place in Michigan and Wisconsin -- more information on this event can be found here.

Gary D., whom I've been lucky enough to share a fair number of miles with, put together this particularly good tale from his experience, and I asked for his permission to re-post it here with his photos.  Please enjoy this sweeping tale of lucky stones, mythically-large cinnamon rolls, and bike mowers!

The Mac and Cheese 1,200k is done, and we’re left with stories, memories, and new friends. I took a few pics for the FB page, with some summary, and pasted them into the document below.
We had a few hiccups regarding sleeping arrangements for Sara, a volunteer and myself, but things smoothed out. Sara got to bed at 6:30am after the first night-not the easiest vacation ever.
I had a great time, got plenty of sleep, and always had sufficient food and water. I carried an energy bar that Peter took down the JMT and ate half of it. I made a PB sandwich for day two and carried it home.
The ride had a nice mix of new and old rando’s, although most of us are over 50. The old randos had a paceline and sang karaoke songs. It was a fairly large group for me, say 8-12 riders, so I eventually abandoned them. There was a joke about whether this was a brevet or a pub crawl.
The ride had an international flavor with a rider from the Netherlands, Ireland, and several Canadians. From the US, we had riders from Washington, NJ, FL, CA- all over the US.
I am apparently one of the few mortals that rely solely on a cue sheet and wrist watch for navigation, and that was tested when I went off course, thinking it was a cue sheet error. I made a greater attempt to ride with others at night, or be sure others were nearby, after that. It makes me rethink this strategy, although in the end, following is cue is part of what I love about the sport.
Thus, the first story: 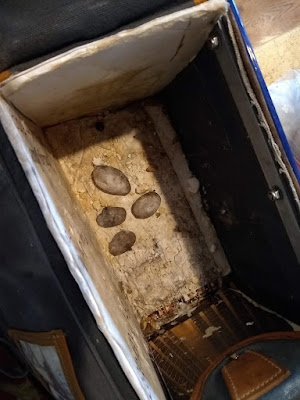 On day 1, leaving Petoskey after dark, by myself, I mis-read the cue and expected to turn at Harbor Springs Airport Road just 0.3 mi from Division, at the first paved road. I had skipped the line about riding another 3.3 miles on the trail. I rode a mile or so, then doubled back. As I passed a park shelter, I heard a voice coming from the darkness. I braked and directed my light towards to shelter and asked for help.
From the back of the shelter came an old hippie-looking man, about my age. I asked if he knew where the Airport road was, and he assured me I was heading the wrong direction. (He was right.) He asked where I was heading, expressing disbelief at the answer, Mackinaw City. Studying the next few lines on the cue sheet, he exclaimed that, no, there was a much better way to get there. I explained that I needed to follow this route, regardless, but was afraid that I had missed a turn. He then offered to take me up the trail and started walking. “Come on”, he said waving for me to follow. I pleaded that no, it would take forever to get there walking.
“Do you smoke marijuana?” he asked. I’m unsure of where this line of questioning could take us.  I tell him that I will continue to backtrack until I either get my bearings or encounter other riders, and as I prepare to leave, he asked me to wait and let him give me some lucky stones. Arrayed on the shelter handrail was about a dozen small stones. He studied them intently, then selected these four small stones, and handed them to me. I dropped them into my handlebar bag, thanked him, wished him well and said goodbye.
The opportunity to meet new people, even so briefly, is one of the things I love about randonneuring.
It’s also why I love to navigate via cue sheets and a wrist watch instead of GPS navigation. 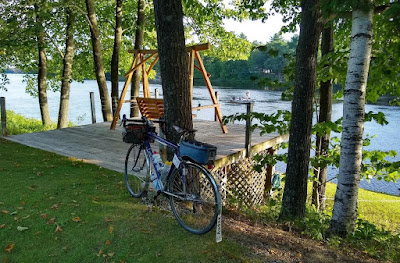 River Road, on Day 3, along the Menomonie River, was one of the most beautiful parts of the course.
Shady and well paved, with glimpses of the river near sunset. 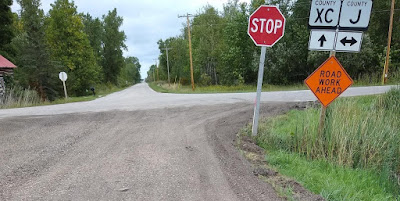 I’m not sure what they have against cyclocross up here. (Stop XC). I was amused about the road work being behind, not ahead. I wish that I had noticed the old log shelter barely visible to the left of the frame when I took this.
We rode about a mile on this lumpy stuff, and I recalled Michele’s words “If you are riding more than 30’ on gravel, you are going the wrong way. Stop and go back!”

This red-head was finishing her breakfast when we came down to eat at the Econo-Lodge. Yes, we know most people ate across the street, where they make real food, or around the corner, where they make great coffee and pastries.  Let’s just say we are suckers for free waffles, scrambled eggs, and cold cereal.
Anyway, I didn’t think to engage this lady in conversation, and she disappeared as riders swept into the breakfast nook. After departure, when we saw her looking back to shore, we recognized her from the motel, but still didn’t approach.
Looking back, I wonder what her story could be, why she was travelling alone across the lake. If she had jumped the rail, would anyone have noticed? We were swept up in the group of riders, organizers and volunteers, and I never saw her again. 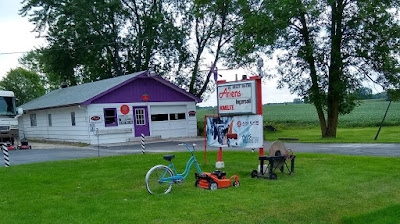 Now here is an answer to that age-old question, “Why would I want a bigger yard?” I’ve wanted one of these mowers since I read that that old guy, Chuck Harris from Ohio, who made Harris helmet mirrors, had made one. Genius. I just wonder how many randos stopped to take this picture. 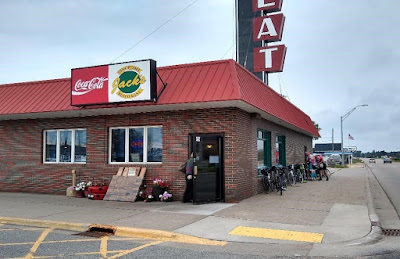 Jack’s, in Rapid River, Day 3, was well placed for second breakfast. Our neighbor has roots in the Upper Peninsula and recommended this place. It was awesome. As I was getting ready to pay, I spotted some of the largest cinnamon rolls I have ever seen. With frosting. Sorry for no picture. I will be dreaming about these for as long as I live. Can something so large and beautiful still be tasty, in equally excessive proportions? These are things I wonder about when I ride. 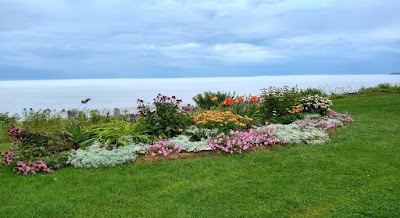 The last few miles of any long event are always special. Here we were treated to some intense displays of power by Mother Nature. Up by the Nuclear Plant, we were treated to bolts of lightning and thunder, with near-torrential rain. The temps would drop 10 to 20 degrees, then immediately climb back towards 80. Waves of mist would roll towards us.
Coming south from Two Rivers, the storm settled out from shore, and as I headed in, I tried to capture the intensity of the waves crashing against the shore.
This lake-front trail has a number of well-kept gardens and memorials. I snapped this picture to capture the ship (visible above the flowers) which appears to be going down. I suspect it is really just partially embedded in fog. There were many people stopped along the trail taking pictures of this ship, so who knows?
I grew up just a few hundred feet from Lake Erie. This ride reminded me of the power and intensity of wind and water. My sincere thanks to Michele, Jeremy, and the army of volunteers that made this experience possible.