Getting up to speed

SO, I can’t just NOT post anything, right?
Okay, maybe… with a return to the rigors of academia I’m effectively getting the creative life squeezed out of me, but, occasionally I suppose inspiration will strike.
For now, I’m filling in some big, big gaps - all of which has to be reduced to bullet points.
There’s just too much material to tackle otherwise, and I’m trying to avoid the whole TL;DR effect.  (Finally, right?)

Yeah, these aren’t “bullet points” in the traditional business sense... it’s me.  Puh-lease.
So, on that, let’s work on getting back up to speed -- what you missed, in 12 brief snippets:


This latest run at the Border Patrol had me trying some new things learned over the last couple of brevets with other riders present.  Discussions about fighting fatigue and dilution-based dehydration (almost hyponatremia, but not quite - just low on electrolytes due to too-dilute of a solution), and “smarter calories”.  Things like Snickers bars.  I mean, they’re EVERYWHERE - at least in the realm of c-stores, and yet, I’ve never had one during a ride.  I know what they ARE, mind you - but, in the context of seeing if they’d work for me on a ride?  Heck no, that’s “candy”... right?  Well, I tried one, and BANG... that’s good cycling food, dude. At least on that day, at least at that milepost.  Knowing that I have WAY more options at the stops solves a few problems:  less hauling around powdered nutrition that may not be doing me any real good, and less c-store aisle paralysis.  The bigger my list of “food that works”, the faster I can get out of a control knowing that I’ve got good energy on-board to make it to the next one, and so-on.

Same with hydrating... I’ve noticed a lot of “camel-like” people just sipping water on hot rides, never complaining about cramps or fatigue, where -- by comparison, and especially when looking back at July ‘16, I’m guzzling water and trying to stay ahead of a hydration curve that I can’t really beat.  Now, it’s not HOT yet... so I have to continue to practice this carefully... but, this notion of maintaining an isotonic environment.  I’m glossing over the science here, because you can read a lot about it elsewhere... but, my theory involves not really hydrating correctly when I should be, not recognizing the warning signs, and not acting accordingly.  It’s tough to do in practice, when it’s hot and one isn’t feeling well, which is why so many people get themselves into trouble when the temperature skyrockets.  I’ll be approaching hot weather rides with a bit more intelligence this year, to see if I can remedy some of the issue that derailed my efforts last year.

So, there you have it... you’re up to speed, and so am I.
Back into a steady streak, enjoying commutes when I can, and revelling in the nice springtime weather.
No complaints, really.

Stay tuned... while the post frequency is likely to remain low for at least the next couple of years while I remain involved in worthy pursuits, I’ll at least try to keep up the occasional post and ride report. 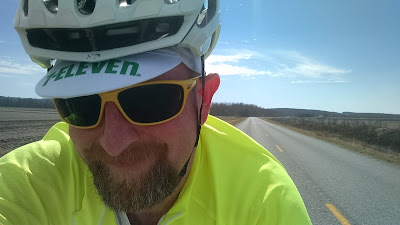