Race Across America has proved to be the experience of a lifetime -- never before have I had so much to organize, think about, coordinate, execute upon; on such little sleep or food.  I made lifelong friends in a short period of time, tested myself and watched others do the same - and, above all, watched the exploits of a truly talented cyclist unfold before me.  Unfortunately, accidents do happen.  It's a part of RAAM, and a part of cycling.  While climbing Wolf Creek Pass in the Colorado Rockies, between Pagosa Springs and South Fork, my rider suffered a fall.  While negotiating the steepest part of the climb, in traffic, and with nasty shoulder conditions, his front wheel got into something - and, as part of the maneuver to right himself he fell sideways and landed directly onto his left hip, breaking it.  This ended Alex Shnyra's RAAM bid, and was heartbreaking for the team.  It could have been much, much worse... a motorist and two motorcyclists witnessed the incident and helped block traffic, while the team and an official worked to get him off the mountain and to hospital, where x-rays confirmed the result.

There is simply too much to relate here... my brain is still decompressing after almost 1,000 miles of pavement covered, the blur of towns and hotels and gas stations, and every conceivable gravel pull-out between the Pacific Ocean and Wolf Creek Pass.  The only things I can say -- the team was brilliant.  For a group of non-cyclists and an Ironman triathlete, led by someone (me) that had never really led a team before, I think we did a fantastic job, and I am immensely proud of having gotten him to the mountain.  Nine solo riders dropped out before Alex's fall, for non-accident reasons.  We rallied to make the time cut-off at Durango - one of the most intense and stressful (yet, rewarding) moments of the ride.  We climbed nearly all the race's climbing - Wolf Creek Pass represented the last mountain before reaching Alex's preferred flatlands of eastern Colorado and Kansas, and we had made up 6 placings on the way to the top.  The plan was working... but, as I said... accidents happen.  I'm glad Alex survived largely unscathed -- yeah, it's a broken hip, but surgery went great, he has a rod in place, and is already up and walking around back in Kansas City... and we're forming plans and lessons-learned for next time.  It may be next year... it may be 2014, or 15... but it is certain:

This is unfinished business.

This one, I like -- but doesn't scratch the surface.
Arizona, the desert... and while many focus on the Rockies as the "real climbing", trust me.... Arizona has more, and it is worse.
The only reward for the climbs is delivered as long, endless, torturous sections of pan-flat desert road, triple digit temperature, and wind.
This was the beginning of another such section.  This would mentally level some people... but Alex never complained.
He is a giant... and he will be back. 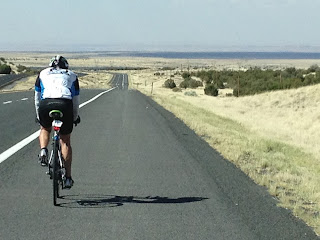 ..was hoping you'd make it to TS32 Camdenton but next time for sure. If anyone would like to volunteer for next year contact ts32raam@yahoo.com ... there are LOTS of opportunities to volunteer at at a Time Stion across Kansas and Missouri.