They say that if you rub the silver too long, the shine will come off. Others might say that there is a fine line between appreciation and the doldrums of excess. The same vacation year-after-year can become boring, in an otherwise un-boring locale. The luster of a new boutique wears off after a few months. And, yes, cycling the same route to-and-from work each day can lead to boredom and burn-out. Yes, even the most passionate cyclers can have their lust hidden beneath a cloak of replication after a time without rest. It’s the resting, the recuperation, and the forgetting that keeps the passion alive. It’s an oft-told tale of absence against the weakness of one’s heart for its aspiration. It’s not complete hog-wash, after all.

A victim of several cases of rampant burn-out last season, I have walked carefully out of the darkness this winter and back into the light of a new season, rife with possibilities and the pledge of a clean slate. A recent pre-dawn conversation about a cyclist that I respect revealed that quantity indeed does nothing to take the place of quality. Someone I had assumed was logging far more miles than myself was, in truth, not. Even in the pitch black of that foggy morning, the lights came on in my mind. You all have read here as I waxed philosophical about ‘less’ being ‘more’, and these few months later, it’s becoming truth. Rested and practically itching to get back on the saddle for the daily grind, I am fresh, ready and packing the Carradice for the jaunt to work in the morning. With mid-50’s forecast and a strong tail-wind in store, I can’t wait to rise before the sun and rifle northbound to the office. But, something deep inside told me that waiting until tomorrow morning would not be good enough.

Last night, the spark was hot, and not wanting to wait any longer after (gasp!) nearly seven straight days off the bike, I took the chance at a cool night with very little wind to just get OUT on the bike. No destination, no pre-determination. Not even bothering to “suit up”, I grabbed a wool cap, cuffed my jeans and hopped onto the bike with the best lights, taking to the streets in a flurry. Frantic to escape, I gave chase to possibilities and began to leave the houses and late-home-from-work drivers behind. Several dozen pedal strokes, and I was leaving the gentle cushion of the street-lit residential maze, plunging headlong into the darkness of rural Kansas.

Flying past that last light-pole, the pale throws of the last streetlight begin to fade behind me, my shadow disappears, and only my headlight beam lights the way. I am careful not to stop pedaling so I don’t disturb the heavy silence that closes the air behind me, as I fly into the dark night! Ah, MAGIC! This is what they say, is it? About rubbing the tarnish from something loved? I had placed night-riding on the shelf for far-too-long – or perhaps just long enough? Just long enough to have forgotten…

The moon was high, casting its eerie, bluish glow on the pavement, as my headlight filled in the gaps between, like whitewash running down an endless black canvas. The grey cast of the grass, the muted colors, the shadowy trees, and the blanket of stars thrown like a pin-holed tarp over the vastness of the sky. The whirr of my trusty tires against the pavement punctuated by a rustle from a rabbit in the ditch, and the lonely howl of a train whistle piercing the drone of wind-noise in my ears. The squint of the eyes adjusting to new headlights popping over a hill a mile ahead, the whines of approaching tires – which sound so different at night! – and the charge of air as white light turns fast to red, and then to nothingness – silence again, alone on this faceless, nameless country road – me and my bicycle, under the moon, moving as one through the night like a child chasing dreams that the sun had scared away.

Miles away, I come to a stop sign, and follow it’s direction – a simple pause, alone in the dark at the crossroads of two slabs. Lights, in either direction, posing no threat, but I wait and take it all in; the coolness of the spring night’s air, the buzz of a light airplane overhead, lights flickering, and I turn around to see the ominous over-glow of the lights of the suburban city from which I’d fled.

“Do we have to go back yet?”, I thought I heard my bike whisper to me, to which I replied – only to myself to the eyes and ears of the stander-by –

With the tug of my wool cap over chilled earlobes, a click, and a gentle push, we rolled across that intersection, further into the perfect night.

There was silver to be polished. 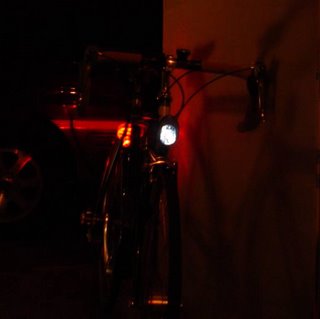 that's poetry to a long-time biker!!! wow, some of my fondest memories from riding were at night in the warmer weather WITHOUT lights. the coolness, the lowered visual sensations, heightened auditory... it almost makes my hair stand on end to think about it. just riding for the joy of movement, escape, fresh air, quiet and solitude... YEAH!