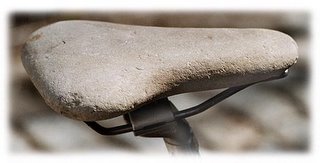 Welp, proving my shiftiness often outweighs my ablility to learn from mistakes, the Brooks saddle that since last week was resting in it's box on the workbench has somehow found its way back onto the bike. Weird, huh? It's as if it was whispering to me all this time... "try me again!"

This time, however, I borrowed the seatpost from the Bianchi -- yeah, yeah... the Bianchi is "done", but I have a method here: First, the seatpost on the Bianchi is darn sexy... but that's not the real reason to use it. The real advantage is the adjustability of it. Compared to the seatpost that was on the Fixxer, this post doesn't have the inter-meshing teeth, which are nice to prevent movement, but not nice if you want to fine-tune saddle angle. So, now, I'm able to get the Brooks tuned to my personal "sweet-spot". The nicer finish is strictly a bonus. But what about a seatpost for the Bianchi? That brings us to point B) which is, if the Brooks realy DOES turn out to be the end-all, I can swap the seat back and forth simply by moving the seatpost between bikes. Since the Surly and the Bianchi have the exact same seat-tube angle, the saddle angle will be exact on either bike, and depending on which one I want to ride, I get all the advantages of the saddle that I've worked so hard to break in. This substantiates itself as point C), which solves the previous problem of "what if the Brooks is REALLY great, then I'd have to get one for each bike, right?" -- Well, not anymore. As long as the seat-tube angle, stem length, and seat-post diameter are the same between bike, just move the post, making sure saddle-height is consistant, and roll on. The only odd-man out here is the beater bike, but that bike is for weather so nasty I wouldn't want a Brooks on it in the first place.

So, once again, persistance might indeed be paying off here.... instead of a knee-jerk reaction that Brooks is terrible, I will give it another try. I have the Flite saddle on it's old seatpost, ready for re-install if it doesn't work out at all. But, to be fair, I *DO* need to give it time to break in, soften a little, and there is a ton of time to make changes before the '06 brevet season.

So far, things are looking up --- after fine-tuning the saddle angle, this morning's ride to work did not yield the same "problems" I was having LAST week - and that's a VERY GOOD SIGN. Only the next hundred miles will tell me for sure - but I have a new feeling that patience will indeed be a virtue here.
Posted by kG on 11/11/2005