I tell you what, a few - maybe a week ago - I was talking about transcending my suburban existance to maybe romanticize myself into the saddle -- and it worked. I have since logged my first major mileage of the 2007 season, most recently today on my commute to work. Today's ride started normally enough, with cold temps - but a welcome tailwind pushing me to the office. This afternoon, however, true images of riding across a frozen lake on my way to a remote settlement became easier to visualize. Kansas, winter, and thick snow showers blanketed the network of roads with an inch-thick slurry of slushy pudding - an 11-mile challenge lay ahead, and as I set forth from the relative safety of the work parking lot onto the nervous streets of town, loaded with 5:00pm cars, I was surprisingly relaxed. The only thing I focused on was staying loose, riding the ruts, and staying textbook - read: "as far to the right as practicable". It was working, and the hundreds of cars that passed me on the way home this evening were very accomidating - though I feel it neccessary to apologize to anyone whose way I might have inadvertantly gotten in. It's one of the few times I was sympathizing on the side of the drivers around me, as news of 30-car pileups and gridlock was fresh on everyone's minds, tense shoulders and nervous applications of the accelerator, only to be complicated by a bicycle on the road ---- in THIS MESS????!!? While *I* know my skill and my experience will keep me upright and secure, the driver passing me doesn't know this. Sadly, the last cyclist they might have passed on a NORMAL day might have been one of those non-signalling, running-the-stop-sign riders that might have been abrasive, or hard to predict at best. It's hard to tell what they expect from me - and I'm certainly not perfect, either. It made certain sections harrowing, but the tenseness was short-lived in each case. In fact, only one mal-informed teenager, safe and secure in his (parents?) Jeep Grand Cherokee used his power-window controls to lower the passenger-side window just long enough to shout "get on the f*ing sidewalk" before rolling it back up and regaining his cushion of recirculated heater-air. Poor bastard. I simply, as always, grin and keep my eyes front, with the sincere hopes that in a fit of rage in his "right" mind he quickly arrived home to fire up the computer and search for "bicycles on the road", perhaps refining his search to include our fair city - only to find himself in the wrong. Sweet justice, only a few clicks away.

Meanwhile, on the slush-covered roads amid the evening rush-hour I carefully make my way.
In the residential maze, in relative seclusion, I slowly make my way past driveway after driveway of amazed citizens, some waving, some just staring with confused looks, snow shovels in-hand, watching as I pass. I offer a quick quip to a mother watching her child play in the new snow near the road -- "Don't try THIS at home, kids" - she laughs, and retorts with a friendly "be safe!" It's a nice evening ride in the snow, no biggie. Miles tick away, twice as slowly as normal, but it's all good. The steady pelting of snow has slowed, and the winds are barely worth mentioning as the sun finally is hidden behind the horizon. I've been on the road over and hour, and still many miles to go -- my average speed must be horrible!

With each passing mile, I try my luck - using a careful ear, I ensure there is no-one coming up behind me and then I guide the front wheel into the thicker snow nearer the shoulder/curb line -- hmmm... seems to stick better here. I abandon the slushy soup for the fresh powder, and suddenly my attempts to stay "as far to the right" are more productive. Passing cars still give a wide berth, likely helped along by the steady and intense flash of my taillights. I make the final turn homeward and enjoy the last of the snow, turning confidently into my driveway without even putting a foot down for insurance -- a good lesson, while probably not as intense in the cardio or hill-climbing department, but still a good time on the bike for a lot of reasons. 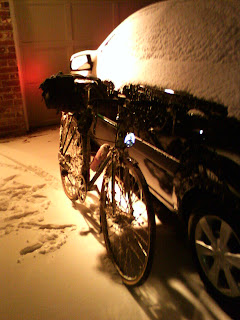 More than that, a big smile across my frozen face lights up -- I've done it, I've arrived at the settlement, a warm fire awaits, and supplies for the weary traveler across this frozen wasteland. Romantic, indeed -- Yes, spring, summer and fall are favorites, of course -- but winter, especially episodes like today, are simply unmatched.

On many a training ride LAST late-winter/early-spring, I remember riding along with Ort(of Texas, ya'll) and talking about how miserable the conditions were -- one ride, rain and about 40 degrees, we were passing the miles by tossing back and forth sardonic remarks about the conditions, etc., and a "certain kind of misery", and I remember myself saying something to the effect of "I've never been on a ride in July or August and said to myself "man, I'm sure glad I did all those horrible rides back in February".

I take that back. 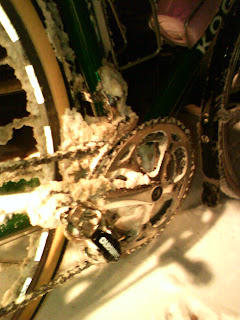 Front derailluer logged with snowpack, and spokes, tubes and fenders hanging onto a little, too.

It was a messy commute!