This weekend marked the annual Cidermill ride, and it was a terrific showing -- nearly 50 people rode out southbound for adventure. Fortunately for those enamoured with the fringe counter-culture, there were only two single-cogs present, one being me. The other was a fab-looking Bridgestone RB1 (I think), refinished, fitted 48x16 free, and rolling with moustache bars -- very cool ride, and comfy-looking. It was refreshing to see SOMEONE else on a single-cog whatever - it gets lonely in the fringe sometimes, ya know.

Still, present was new-found friend and fan-o-the-site Bo, plus Badgerland who rode in from the great north territory, and Krishna, and 47 other wrapped up riders braving the (sorta) chilly fall air, with visions of hot cider dancing in their heads. Awesome good times. 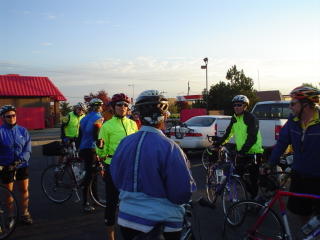 At 8-bells, we rolled out into the traffic stream, and headed out for a social spin - for once things didn't instantly degrade into a fever-pitched smattering of pacelines and mayhem. With the fresh sunrise in our faces, it was nice just to be riding along, chatting it up, and discovering the route together, instead of alone.
About 4 miles in, I managed to pick up a nasty bit of glass, but thankfully it didn't start a leak - roll on! I got lucky that time, but it reminded me how finicky these thin race tires can be. This is fast becoming NOT the time of year to run them anymore. Might have to hang them up for spring before long. 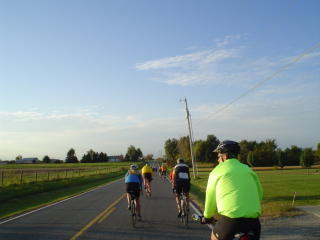 After my glass incident, I was back in the pack and enjoying the morning's sights. Long shadows, birds in flight, endless fields just south of town - awesome. Bo and Badger were talking it up, comparing heartrate numbers, and others of us were talking about the leaves and their colors revealing, negotiating the ever increasing SE headwind as we went. Before long, we were strecthing out a little, as always happens. Eventually we ended up in Spring Hill, and figured out exactly where the pavement on Woodland Rd ends (oops!) - a little backtrack gets us the unexpected treat of a jaunt thru downtown Spring Hill, and a few of its neighborhoods -- it was like a snapshot of yester-year, honestly. Very cool archetecture, the typical old-school downtown district with its wide way, and the pot-holes that time forgot.

We got back on the main drag, eventually, and then ended up on the southside of town and the designated breakfast stop, which was not ready for us. This is what blogs are for: Curly Brown's in south Spring Hill, KS. -- DON'T GO THERE. We got the king-size shaft, and they don't deserve the business. Barely worth going into here, so I'll spare you. Trust me: I don't black-ball much, but when I do it's for keeps. This restaurant makes the dark list of doom.

From there, Krishna, Badger and I decide it's best to find out coffee fix elsewhere, so we motor out, along with a large portion of the rest of the bunch, to Old KC Road and Hillsdale, KS, instead. I'd rather have gas-station coffee than anything that Spring Hill joint was serving up after that episode. We hit the BP station at 255th and served ourselves up some java, cheap, and pulled up some curb to while-away a few dozen minutes. Mmmmm, tasty. But not as tasty as the cider that awaited us only "five" miles away. YEah - shock, the dude makes a blunder estimating the mileage to the cidermill, which was actually like 10-12 more miles away. Nice job, dude. :) As Badger said, "just out for a nice Sunday ride, it doesn't matter" True, true.

A few hundred miles (kidding) later, we were at the 'mill -- mmmmm, boy. I ordered up two large cups of the sweetest nectar this side of Tillamook Creek (whatever) and swilled one down while I chatted again with the other single-cog rider, met up with Bob Burns (local RBA and rando-GOD-guy) and discussed all nature of craziness while the cider seeped into our tired legs. But, unfortunately, with a noon-deadline looming, and ten-till-eleven already showing on the wrist-watch, it was time to motor serious. I dumped the rest of the cider into my waterbottle, and Krishna, Badger and I mounted up for the return leg.

The ride back was pretty nice, as I managed to have a ton of reserve left thanks to the sub-mach lesure-pace outbound. It was time to use it all up now, if any hope of retracing the next 26 miles was to be done within the hour and ten I had left. Time to see what I was worth...but not before snapping the obligitory headshot from the highway: 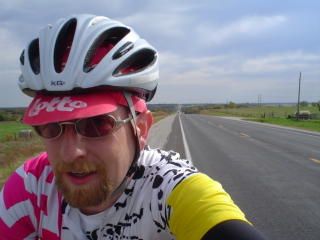 Yeah, yeah.... in a bigger format, and without my obtrusive noggin in the way, this shot was pretty cool... the big valley of K-68 headed down towards the ridge that US-69 sits on in northern Miami County. And look at that... just enough shoulder to not get killed on! Wheoooo!!!!

I was pretty happy with myself, considering: I managed to catch Bob and 'friend' on the return leg, and they had left something like 15 minutes before I had, plus after short 2-mile detour on Renner Rd, which is gravel by the way, I was home only 10 minutes late -- not too shabby, dude. I guess a little summer fitness is left in the pipes... good thing I have all winter to forget about it! AHHH!! So, the tally: a single-speed, me on the fixxie, 48 "other" bikes, 1 botched breakfast stop, 1 gas-station coffee, 40 oz. of hot cider, and 48 miles of pavement, and 2 miles of gravel = a fall ride that will not soon be forgotten! Excellent stuff! You shoulda been there -- and if you WERE, you know what I mean! See you next year, Cidermill! (ok, maybe... that cider is so good, I might just have to reprise this thing next month... hmmmmm.......)
Posted by kG on 10/17/2005